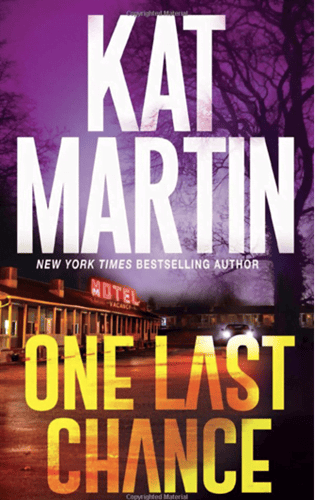 The New York Times bestselling author delivers an explosive thriller perfect for fans of Laura Griffin and Heather Graham featuring a dangerous cult, an ex Green Beret, and a female private investigator who will stop at nothing to rescue her missing sister and unmask a high-stakes conspiracy.

Former Green Beret Edge Logan has made a new life for himself at Nighthawk Security in Denver, using his finely honed skills to neutralize threats of all kinds. When he overhears friend and fellow agent Skye Delaney discussing a new case involving her missing sister and a mysterious cult, he offers himself as backup. With her own military background, Skye is gutsy and more than capable, but a cult like Children of the Sun is too risky for anyone to investigate alone.

Skye is grateful for Edge’s experience, even though she is aware of the attraction simmering between them. Her battle scars make her reluctant to get involved with anyone, much less a coworker—even a warrior like Edge. But infiltrating the cult’s compound is more complicated than expected—and something much more sinister than worship is clearly going on behind its walls. As the pair works against the clock to unearth high-stakes secrets, the personal barriers between them begin to crumble. Together, can they unmask the face of evil before their time runs out?

Excerpt From "One Last Chance"

“Make your choice, Sergeant Logan.  You can resign from the army with an honorable discharge, or you can face a court martial–where no doubt you’ll be sentenced to years in Leavenworth prison.”

Edge stood at attention in front of Colonel Raymond Miles, seated behind his desk at Fort Campbell, Kentucky.  The office, with only a few framed certificates on the walls, a handful of photos of the colonel with his men, and not a single picture of his family or friends, was as stark and unforgiving as the man behind the desk.

“What’ll it be, soldier?  If it weren’t for your outstanding record and the silver star you earned, you’d already be under arrest.”  Miles shoved the papers across the desk and set a ballpoint pen on top of them.

Edge looked down at the papers, his jaw clenched so hard it hurt.  Given the circumstances–and not a shred of proof that his allegations against a highly respected army major were true–he had no other choice.

“Sign them and get on with your life,” the colonel advised.  “You won’t get another chance.”

A muscle flexed in his jaw.  Edge reached for the pen and scrolled his signature at the bottom of the page.  He felt devastated clear to his soul.  He thought of the man who had destroyed his life, Major Bradley Markham, the traitor who had managed to escape justice.

At least for now.

With a silent curse and a vow of revenge, Edge Logan closed the door on his past and headed into an uncertain future.

“Hey, Edge, what’s up, bro?”  Frowning, Trace Elliott stood in front of him, one of his closest friends, a tall, dark-haired man with eyes a less intense shade of blue than Edge’s own.  “You look like you’re ready to kill someone.”

He and Trace both worked at Nighthawk Security, mostly personal protection, but they were also licensed P.I.s.  Edge had been raised on a ranch with his two older brothers, but it was never his calling, not like the army.

He straightened in the chair behind his oak rolltop desk.  “Sorry.  Bad memory.”  He hadn’t realized his mind had been wandering, traveling down a dangerous road into the past.

“Yeah, I’ve got a few of those myself,” Trace said.

The two of them had served together in the 75th Ranger Regiment, Fort Benning, Georgia, then in Afghanistan before Edge had gone on to become a Green Beret.  Trace had been smart enough to know he wanted something more than a life as a soldier and had resigned after his last tour of duty.

Edge had been forced to quit.

One of these days, he vowed for the umpteenth time, Major Bradly Markham would get the justice he deserved.

“Want to get a beer?” Trace asked.

“Yeah.”  The Fainting Goat was just down the block, a pub in an old brick building.

Edge’s gaze traveled across the office to where a pretty brunette, another Nighthawk agent, sat at her desk talking on her cell phone.  In Edge’s book, there wasn’t a movie star who could top Skye Delaney’s natural beauty.  Skye was Conner Delaney’s sister, the man who owned and operated the company.  Like Edge and Trace, Skye and Conn were both former military.

Skye glanced up for a moment and her sea green eyes shifted across the room in his direction.  Edge felt the contact like a blast of heat to his groin.

So far he hadn’t acted on his attraction to a woman he considered a friend.  They’d been working together for a while now, often alongside Trace, most recently providing security for an expedition into Mexico led by Edge’s brother, Gage.

Rising from his chair, he walked over to Skye’s desk to invite her to join them, just as a friend, of course.  At five-foot-five, she was ten-inches shorter than his own six-three, with a sexy figure despite her slender, lean-muscled body.

Being former army, she was disciplined and always in control.  Her stiff-spined military posture, even her mahogany-brown hair, pulled ruthlessly back in a ponytail, seemed to send a warning not to get too close.

More and more, it was a challenge Edge wanted to accept.

As he approached her desk, he didn’t mean to eavesdrop, but he couldn’t miss the change in Skye’s body language, the growing tension as the conversation progressed.

“Are you sure this isn’t something she’ll eventually outgrow?”

“I admit that doesn’t sound good,” she said.  “I’ll check into it for you, see what I can find out.  How long has it been since you’ve heard from her?”

Skye’s fingers tightened around the phone.  “That definitely isn’t good news.  All right, then, I’ll stop by in the morning around nine.  Try not to worry, okay?”  Skye ended the call and set the cell phone back down on her desk.

“That was my stepmother.  Margaret’s afraid her daughter, my half-sister, Callie, is in trouble.”

“What kind of trouble?” Edge asked.

“Margaret says Callie got interested in the teachings of a church out in Chaffee County.  Margaret says it’s more like a cult and she’s afraid something bad might have happened to Callie.  She hasn’t heard from her in nearly two months.”

“I think her mom has a right to be worried.”

“So what’s your plan?” Edge asked.

“I’m driving out to Blancha Springs.  The compound is a few miles out of town.”

“That’s a helluva drive.  If there’s a problem, you might need backup.  How about I go with you?”

The look on Skye’s face said she wanted to say no.  She didn’t want to get involved with a co-worker any more than he did.  But going alone into what might turn into a risky situation wasn’t smart, and Skye was as smart as they came.

“All right, if you really think it’s necessary.”